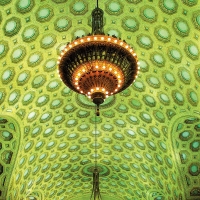 Born And Raised In Toronto, I Had No Idea About Some Of These Wonderful Things!

BURSTS OF CREATIVITY MAKE A CITY WORTH LIVING IN

"I live in Toronto," begins the voice-over of the Oscar-winning short Ryan, "a city in Canada where I see way too many shades of grey for my own good health."

It can be difficult to live in a place whose very aesthetics are a constant reminder of our inability to do better. Where too many streetscapes are defined by indifferent condominiums and the same handful of banks and pharmacies at their bases. Where cuts to transit make rush hour an increasingly degrading experience but even hypothetical inconveniences to drivers are considered unacceptable. Where we're told by our politicians that nice things are beyond us and that the "TORONTO" sign in Nathan Phillips Square is unworthy of even the modest funds necessary to keep it around for another year.

Where public investment is treated as a privilege and not a right, to be doled out on the basis of political expediency rather than need.

Thankfully, there are the buttons.

In each of the basement washrooms at Otto's Berlin Döner in Kensington Market is a button on the wall. Oversized and unmissable but wholly unmarked, there is no need to press them, but you can. And in the midst of the sweltering heat of August or the endless winter of March, you will be delighted.

Easter eggs like these are what make the city – any city – worth living in. They are the bursts of creativity or beauty, oddness or whimsy, that make it possible to get through the days during the greyer months when doing so would otherwise be a challenge. Sometimes they are destinations, but often they are unexpected. They are physical indicators that someone, in a distant or very recent history, took the time to care, to contribute something to the urban fabric that would intangibly improve the experience of it.

The Peter Pan statue in Glenn Gould Park, for example, is not unique. It is one of six identical copies of Sir George Frampton's original in London's Kensington Gardens. It is not even the only one of its kind in Canada.

But with its nine fairies, seven mice, five rabbits, three birds and one each of a snail, squirrel, salamander and frog – all circling Peter and Wendy – it brings a splash of childlike aspiration to the northwest corner of Avenue and St. Clair.

There is no inherently logical reason it should be there; the park's pianist namesake wasn't even born when it was installed. That it was donated by something called the College Heights’ Association “to the spirit of children at play” is a quirk of history, and that it persists to the present is a peculiar gift.

The value of a city is measured, in part, by its capacity to deliver the unanticipated and to present itself as a place where such surprises are welcomed.

In the late 2000s, I was a member of the Toronto Psychogeography Society, which is a fancy way of saying I went on weekly evening walks typically organized by Spacing editor Shawn Micallef. The excursions generally fell into two categories: venturing through parts of the city that we'd never otherwise experience on foot, or wandering through areas we considered familiar but that still had secrets to reveal.

There was also a third kind of walk: ones that trekked through places well known to just one of us. Back then, I was living with my family at Yonge and York Mills, a location I resented for its distinct lack of things. On the second coldest night of the winter, the group came up to my area, and we headed off through the empty Don Valley Golf Course.

Held in the air by towering concrete supports, the 401 crosses the ravine there via a massive bridge that soars over the greens. We climbed the steep hill at the west side of the bridge until we found ourselves adjacent to the highway, at the protected tip of a fork in the road.

Cars zipped past on both sides.

I had known about the bridge and the awesome industrial-ruin feel of its base. I didn't know you could safely come eye to eye with the highway, staring down traffic on one of the busiest routes in the world. I had never done anything like it before.

In that moment, Toronto in February was okay.

Almost 60 years after it fell to Earth near the south end of the Humber bike trail, you'll find a folly with a practical function: a flying saucer attached to a stone-faced public washroom. Architect Alan Crossley's playful mid-century modernist masterpiece is a forlorn object today. Grubby, neglected, tagged with graffiti and much in need of a cleanup, it was recently added to Architectural Conservancy Ontario's (ACO) list of buildings at risk. ACO says a plan to demolish the washroom (it's attracting what local councillor Justin Di Ciano describes as "illicit deals and behaviour") and wrap the steel posts with stone from the washroom walls will "undermine its architectural elegance." That plan is being re-evaluated thanks to a campaign led by ACO president Catherine Nasmith and a change.org petition launched by Stephanie Mah of ACO's NextGen. Sign the petition and visit the Oculus. Marvel at its elegant asymmetry, test the echo, then lie on your back and look up into its eye to the sky and wonder.

This 57-storey limestone classic, part of the four-building complex that anchors the city's financial district, was the tallest building in the British Empire when it was finished in 1931. But the gold-coffered ceiling and art deco styling made it a showpiece in its time and now a treasured heritage building.

Just north of Christie Pits on Yarmouth, a life-sized elephant named Sally lives in James Lawson's front yard. The nearly three-metre-tall sculpture has made the nabe her home since 2003. Lawson inherited her from his friend, artist and industrial designer Matt Donovan, who designed the beast as part of his thesis project at OCAD. Made of fibreglass, chicken wire and plywood, the oversized lawn ornament stops people in their tracks. "I still hear exclamations of surprise and giggles from passersby," says Lawson. "She's increasingly hidden by my cherry tree, which means that in the summer most people in cars miss her unless they're moving slowly."

Tiny and secluded, Gibraltar Point Beach has a witchy vibe. Perhaps it's the giant dream catchers in the trees or because it's beside Toronto's oldest (and spookiest) landmark, the nearby Gibraltar Point Lighthouse. Built in 1808, its original keeper, John Paul Radelmüller, was murdered on a cold night in January 1815. Legend has it he was thrown from the top of the lighthouse by soldiers from Fort York and that his ghost is still searching for his body. The tale grew in popularity following the discovery of parts of a human skeleton some years later. Worth seeing: Michael Davey's rotating Rogue Wave art installation of materials washed up on the shore, in niches in the pavilion wall at the western edge of Gibraltar Point.

This little-known oasis of calm in what may be Toronto's least appreciated public square sits atop the buried course of Taddle Creek and is approached via Tibetan arches. Like the 13th-century stone labyrinth at Chartres Cathedral in France, it inspires artful meditation in those who take the time to walk it. Also a great place to people-watch.

A Canadian water landmark, Rosehill Reservoir was built in 1873. During the Second World War it was enclosed by a barbed wire fence for fear of sabotage, much to the chagrin of locals who'd come to enjoy the occasional dip in the water. It was covered in 1966 to protect it from encroaching development - and reportedly due to continuing Cold War worries. A fountain, wading pool, 1.6 hectares of reflecting ponds and a waterfall were added as surface features, although these days the reservoir operates more as a park than a connection to Toronto's water history.

7. EQUAL BEFORE THE LAW, AT THE MCMURTRY GARDENS OF JUSTICE

Like a great editorial cartoon, this public sculpture by Eldon Garnet uses just a handful of symbols to distill a weighty concept into a profoundly simple image. A lamb and a lion, both life-size and cast in bronze, balance perfectly on opposite ends of a scale, its imposition of equality transcending nature and physics. On its site behind the 361 University courthouse, where the city's most serious criminal cases are heard, the work is a firm and explicit reminder of the ideal of justice expressed in Section 15 of the Charter of Rights and Freedoms: "Every individual is equal before and under the law and has the right to the equal protection and equal benefit of the law without discrimination."

This two-kilometre stretch of abandoned rail line that used to serve industry in the west end was converted into a pedestrian and cycle path in 2010 in a piece of groundbreaking civic planning. Too bad plans to extend the path south to Union Station are still in limbo. Notable features: painted bollards, John Dickson's Frontier sculptures and the view from the Wallace Avenue bridge.

Bach's Suite No. 1 in G Major for unaccompanied cello is one of the best-loved pieces of string music. Yo-Yo Ma recorded it in 1997 for a six-part film series, Inspired By Bach, exploring the visual qualities of this music. He worked with Vermont landscape artist Julie Moir Messervy to design a botanical garden that would reflect the sense of the piece. When the Music Garden initially planned for Boston fell through, Toronto stepped in, and our lakeside garden opened in 1999. A spiral walkway winds through the garden, with markers along the way explaining the connections to different sections of Bach's Suite. Concerts take place through the summer most Thursdays at 7 pm and Sundays at 4 pm. Entrance is free and wheelchair accessible, with guided tours offered until late September and $6 audio tour rentals available year-round at the Marina Quay West office (539 Queens Quay West). Music to our ears.