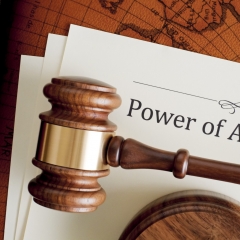 Finding Out Your Power of Attorney Is Powerless

You think you’ve done everything right: Your parents or other relatives have signed a durable power of attorney. Among other things, it allows you to handle their finances — taxes, bills, bank accounts, real estate sales — if they become incapacitated.

Everyone sleeps better. Months or years later, suddenly or gradually, the time comes when older family members can no longer manage transactions on their own.

You take the witnessed and notarized document to a financial institution — a big brokerage firm like Wells Fargo or Ameriprise, or a national or regional bank or credit union. And officials say no, they won’t honor your power of attorney.

They insist that the account owners sign the institution’s own power of attorney form — very unwelcome news, because by now the older account holders may not be competent to sign legal forms. That’s why you’re there in the first place.

Claire Ullman, a Barnard College professor, recently ran into this roadblock. She and her husband have been helping an older relative consolidate her accounts.

But Roslyn Savings Bank wouldn’t accept the New York State power of attorney that the relative had signed three years earlier, when she sold her house. (In this case, the bank wants a longer state form.) In the meantime, the relative has developed dementia.

“We have a power of attorney, but we can’t use it,” a frustrated Dr. Ullman said. “People sign these anticipating incapacity. Once incapacity arrives, it’s too late to sign another one.”

Continue reading the main storIt’s not clear how often similar scenarios, with their Catch-22 absurdity, take place. But elder-law attorneys across the country say they have encountered financial institutions unwilling to honor valid powers of attorney.

Even in states where statutes require banks to accept a durable power of attorney, or waive their liability when they do accept it, elder-law attorneys have seen some balk.

“Numerous clients have had this dilemma,” said Bernard Krooks, a founding partner of Littman Krooks in New York. “They listened to all the pundits and drew up the documents. Then the bank says, ‘That’s very nice, but it’s not our form.’”

In Long Beach, Calif., Sally Gutierrez had helped her mother, Dorothy Hutchings, with a checking account at a local credit union.

Parkinson’s disease hadn’t affected Mrs. Hutchings’s memory or judgment, but at times she couldn’t write. “She had bad tremors on her right side, and she was very weak,” Ms. Gutierrez said. “Even making an X was too hard for her.”

So Ms. Gutierrez put her own signature on the checks and, in the spirit of full disclosure, carefully wrote underneath, “POA for 2007 Amended Hutchings Trust.” She had all the necessary paperwork, too, or so she thought.

In 2008, however, the credit union informed her by letter that it would no longer honor the power of attorney. Staffers insisted the family fill out the credit union’s own form, accompanied by letters from two physicians attesting to the account holder’s inability to make financial decisions.

“It was shocking,” Ms. Gutierrez said. “I was panicked.”

Financial industry executives said they couldn’t provide estimates of how many banks and brokerages insist on their own power of attorney forms, but “I don’t think it’s uncommon,” said Nessa Feddis, the American Bankers Association senior vice president for consumer protection.

She defended the practice. “Banks hold important assets,” she said. “They have to be very careful when someone is asking for access to a customer’s account.”

You can see her point: Government agencies and advocacy groupsincreasingly warn about the financial exploitation of older adults, especially those with cognitive impairment; the perpetrators are often family members.

Some financial institutions now train staff members, who should indeed be alert to abuse, to recognize signs of diminished capacity.

But banks have other motivations, too. “Typically, when they’re insisting on their own forms, they’re concerned about liability,” Ms. Feddis said.

If Nefarious Nephew A illicitly drains a senior’s account to buy a Ferrari, Upright Nephew B might sue the bank. Sometimes, too, banks dismiss a power of attorney as being “stale” — signed too long ago — or for other reasons.

The Financial Industry Regulatory Authority, the nongovernmental organization overseeing securities firms, recently issued an investor alert about powers of attorney. It cautioned, among other things, that you may need a firm’s own form.

What can exasperated families do? One avenue: A lawyer can often cajole, reason or badger banks and brokerages into honoring valid powers of attorney by going above local managers to higher-ups.

“Once we get to the right people, they accept it,” said Craig Reaves, a past president of the National Academy of Elder Law Attorneys who practices in Kansas City, Mo. “I’ve never had to go to court or even threaten litigation.”

Of course, you then have to pay the lawyer.

Or you can be proactive by asking a brokerage or bank if it requires its own durable power of attorney document and, if it does, having your relatives sign it when they are still capable of doing so. You’ll have to do this for every institution where they have an account.

But read those bank forms carefully or have a lawyer review them, Mr. Reaves advised. They can contain disadvantageous indemnity or arbitration clauses, or provisions that contradict the individual’s general power of attorney. In such cases, “I’ll tell clients not to sign, and we’ll fight the fight,” he said.

Though it’s usually unnecessary, lawyers must go to court sometimes to make financial institutions accept a power of attorney. Stonewalled families have had to petition to become their relatives’ guardians or conservators — a long, expensive process — when all they wanted was to pay their bills.

The caregivers who told me about their travails found less drastic solutions.

Ms. Gutierrez managed to open accounts for her mother at a new financial institution. Dr. Ullman’s relative keeps most of her money elsewhere, so the family’s inability to consolidate several small bank accounts has been maddening but not harmful.

Sometimes, though, people just wing it.

Eric Murray felt relieved when his mother, Jane Asbury, completed her power of attorney and health care proxy before moving into an assisted-living facility in San Jose, Calif., several years ago.

A few months later, he learned that Wells Fargo wouldn’t allow him to access her accounts to pay her bills because she hadn’t signed its form. Mr. Murray, a software engineer, argued that his mother had signed California’s statutory form. No dice.

So he took Wells Fargo’s document, waited for one of his mother’s better days — she had Alzheimer’s disease but could still chat pleasantly — and drove her to a local notary. “I crossed my fingers that the notary wouldn’t ask too many questions and notice that she was impaired,” he recalled. “I did most of the talking.”

Mrs. Asbury signed; the notary stamped; Wells Fargo was placated. How this charade protected anyone is debatable, but the gambit worked. Mr. Murray was able to handle his mother’s finances until her death in 2013.