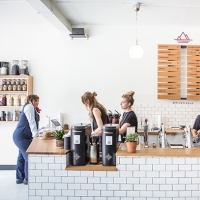 Looking For A New Java Joint? 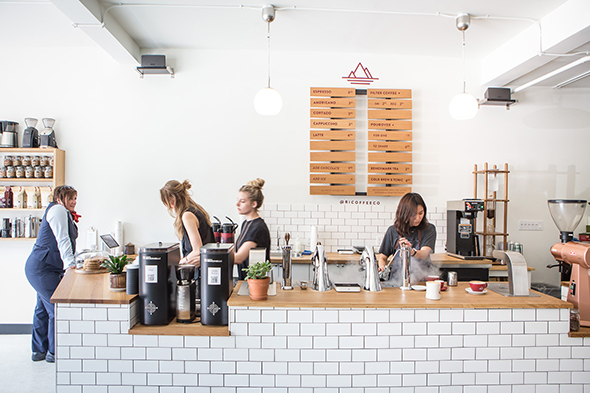 The best cafes in Toronto on the west side are stalwarts on the caffeine scene. There's some stiff competition out there these days, what with the abundance of indie coffee shops opening up over the past few years. Yet many of these spots have managed to expand and improve their offerings over the last few years, and java-happy patrons are duly rewarded with some excellent joe.

Here are the best cafes in Toronto west of Yonge St.

What started off as one small-but-charming coffee shop on Harbord in 2009 has evolved into a name that's become synonymous with quality in Toronto. Sam James has opened up five other tiny-yet-impressive locations over the ensuing years (including one across from Trinity Bellwoods Park), which all use his own locally roasted Cut Coffee. MORE »

This restored heritage building at King and Spadina that was last Global Village Backpackers is now a bright and airy place to pick up a pour-over made by the first-ever automated Pour Steady machine in Canada. Other fun beverages include crème brûlée cappuccinos with tops caramelized by blowtorch so that, like the dessert, you get to crack into it. MORE »

At the corner of Yonge and Temperance, this posh-looking cafe's design and feel harkens back to the classic Viennese coffee houses of the 19th century, setting it apart from the predominantly rustic, industrial-chic indie cafes popping up around the city. Its custom blend of beans and delectable baked goods seal the deal for Financial District caffeine-seekers. MORE »

Early Bird is serious about its coffee, with an elaborate brew bar set-up in addition to its espresso-based offerings. It now also has a mobile bar at the stunning new QRC West building, serving up expertly made drinks along with tempting baked goods. Be sure to check out the hidden rooftop patio at the original Queen-and-Bathurst location if you get a chance. MORE »

Similar to Sam James, Jimmy's is a beloved Toronto coffee brand that started up in 2009 and has since expanded to three other locations, all comfy, home-like places that use beans from Classic Gourmet for its drip and espresso. Funnily enough, its founder is not a Jimmy (his name's Phil Morrison). These spots are a freelancer's haven, all with outlets and free Wi-Fi. MORE »

Owner Geoff Polci opened Crema as the first great coffee shop in the Junction back in 2008, and now it's bloomed into a three-location endeavour (with the other two east of Yonge) plus a coffee-roasting biz in the form of award-winning Propeller Coffee. The original space is still a pleasure to visit, with a welcoming atmosphere, good tunes and of course, superb coffee. MORE »

A Parkdale staple, Capital is a second home to some in this area. Formerly an office for VICE, this joint exudes both a cozy and cool vibe, with friendly service, fresh-baked goods and well-made espresso or French-press coffee. It's a great place to get some work done, catch up with a friend or just plain people-watch. MORE »

For a place that doesn't offer Wi-Fi, Manic has quite the loyal following. Clearly, this is 'cause the coffee is on point (fun fact - Sam James used to work here), as is the house-made gelato (both can also be had at the affiliated Put A Cone On It in Koreatown). There's a real community feel here, likely because patrons aren't glued to smartphones and/or laptops. MORE »

This local coffee roaster's been around for over 20 years, but only opened its first-ever flagship cafe on Roncesvalles in 2015. It does things right, featuring seasonal single-origin beans for its espresso-based beverages, pour-over coffees and addictive cold brew & tonic. And who can resist those highly Instagrammable "COFFEE" floor tiles in the entryway? MORE »