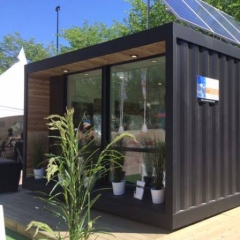 When Will Toronto Catch On To Tiny House Fever??

Shipping containers travel the world on freighters so it may be hard to imagine them as homes, but that is something a new Edmonton company is trying to do.

Honomobo is a company taking shipping containers and recycling them into suites, ranging from studio suites to three-bedroom apartments. It launched this past spring, and this weekend, the company held an open house in Churchill Square to showcase its suites.

In 2015, the City of Edmonton changed its bylaw to allow garage and garden suites on any lots 400 square metres or bigger.

“People are more concerned with living in a walkable community, going out to get a coffee, biking to work and transit. I think there is a shift happening where people are concerned about quality of space over quantity of space.”

The suites, which are manufactured just outside Stony Plain, range from 200 square feet to 1,200 square feet. It will take the company one week to build a new garage and then about two days to place the shipping container on top. The costs range from $99,000 to $150,000.

“It’s really an opportunity for people who have existing land to put a secondary suite in their backyard and find an additional source of income.”

Siebenga, who has worked in the shipping container industry for more than 10 years, said containers are a good fit because they are designed to be shipped and moved and transforming them into suites repurposes containers that otherwise would have been abandoned.

“This fascination [with] living inside a shipping container isn’t a new idea but it’s only just gaining steam,” he said.

Lisa and Alan Jeans took a tour of the shipping container in Churchill Square on Sunday. The pair live in an apartment right now.

However, the pair has concerns about whether they would be able to fit their lives into the small suites.

“Where would you store, especially if you’re in Edmonton, you have winter boots, winter coats and all that stuff. There’s not really a large foyer. That would be a little bit of a drawback,” Alan said.

“We have to pare down quite a bit to get everything we’re used to using in here. I think that would be something to consider,” Lisa said.

Trisha Yereniuk and her son Alex stood in line on Sunday for a chance to see the suite. The family supports tiny homes.

READ MORE: Tiny houses growing in popularity, but looking for a place to call home in Canada

“It seems pretty interesting. It would be nice to figure out how it feels,” Alex said.

The family lives in a high-rise condo in downtown Edmonton and said they are interested in living small.

“We don’t use a lot of square footage so it wouldn’t be that hard to go to a container home. [But] winter is a concern,” Trish said.

Hundreds of people came through the open house over the weekend. The company has 16 pre-sales and dozens of serious inquiries, and it is sending suites to Hawaii, Los Angeles and Vancouver.